In the older suburbs of Adelaide besides individually listed State and Local Heritage items there are also Contributory Items sited in Historic Conservation Areas. These items usually buildings can also encompass land, structures and landscaping. Generally with respect to buildings they do not necessarily warrant individual heritage listing but are considered to contribute to the general streetscape. Conversely Councils have also listed non-contributory items that detract from their streetscape and their redevelopment is therefore encouraged.

As a general rule contributory items can be redeveloped with rear extension and/or a second storey (possibly within the roof space). However the redevelopment needs to be undertaken in such a way as not to detract from the appearance of the building from the street. Therefore design elements become relevant such as:- 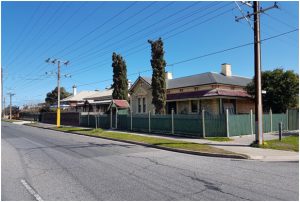 In the case of the corner dwelling (located above) the original proposal for a new second storey was substantially amended. After discussions with Council staff including their Heritage Advisor the bulk, scale, dormer windows, materials and finishes were substantially altered.

One of the most substantial changes was to set the proposed new second storey below the ridge line of the existing villa. In effect a balcony with French style doors will be created off a large bedroom and en-suite bathroom setback well from the street so it will not be visible above the existing ridge line. This was the most extensive change and will respect the contribution the existing villa makes to the streetscape.

Other changes were also made to the northern or side street elevation so the extension was less bulky, had less dormer windows and was clad in a different material so the two storey addition does not substantially detract from the existing dwelling.

So it is quite possible to construct a second level on top of an existing villa provided it is setback well from the street behind existing roof ridge lines. Similarly the extension should take design clues from the existing historic built forms such as:-